Safety and Efficacy of the Combination of 308-nm Monochromatic Excimer Light and Topical 0.1% Tacrolimus Ointment in Segmental Vitiligo: An Open-label Study 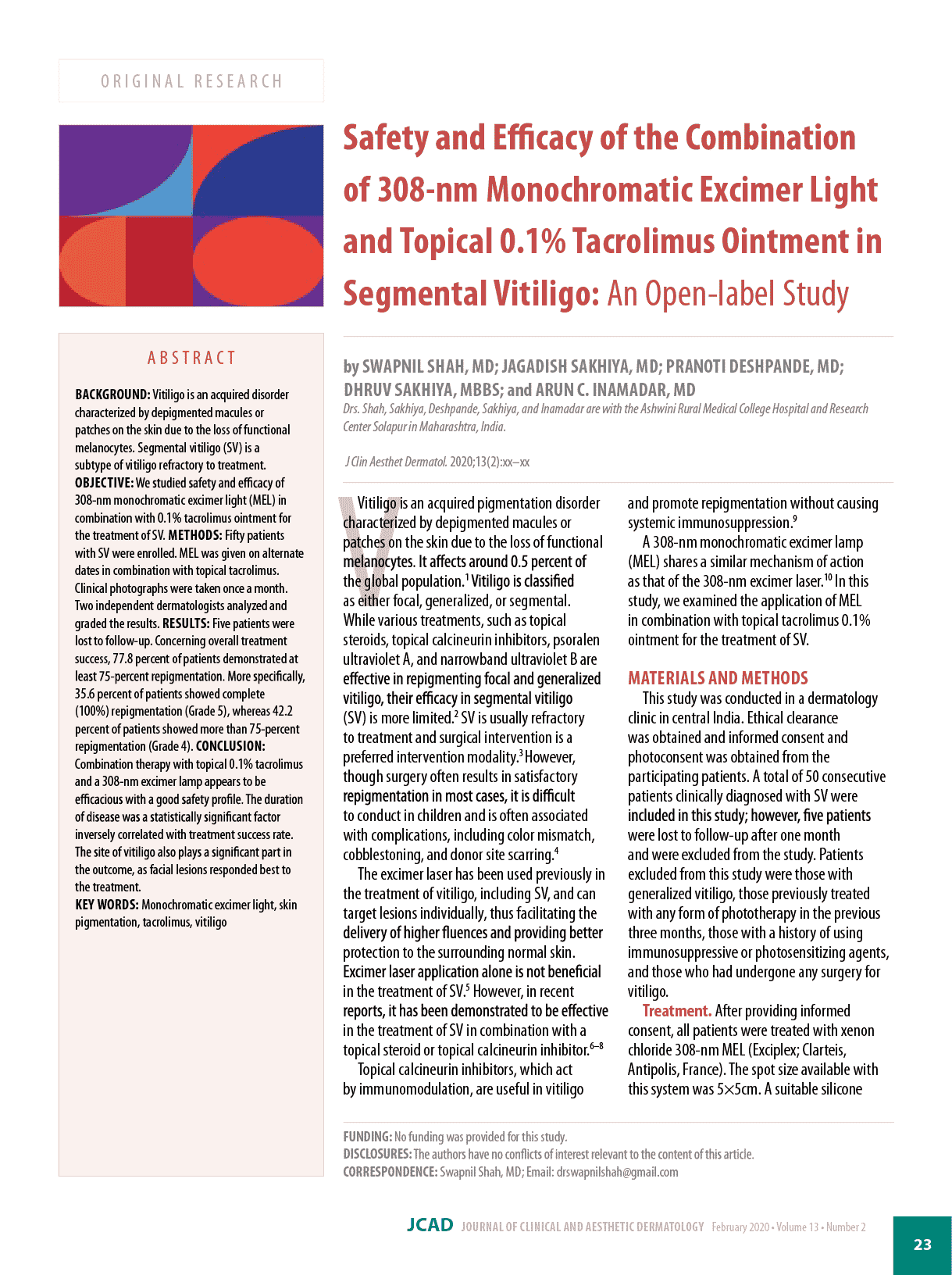 Background: Vitiligo is an acquired disorder characterized by depigmented macules or patches on the skin due to the loss of functional melanocytes. Segmental vitiligo (SV) is a subtype of vitiligo refractory to treatment.

Objective: We studied safety and efficacy of 308-nm monochromatic excimer light (MEL) in combination with 0.1% tacrolimus ointment for the treatment of SV.

Methods: Fifty patients with SV were enrolled. MEL was given on alternate dates in combination with topical tacrolimus. Clinical photographs were taken once a month. Two independent dermatologists analyzed and graded the results.

Conclusion: Combination therapy with topical 0.1% tacrolimus and a 308-nm excimer lamp appears to be efficacious with a good safety profile. The duration of disease was a statistically significant factor inversely correlated with treatment success rate. The site of vitiligo also plays a significant part in the outcome, as facial lesions responded best to the treatment.

Vitiligo is an acquired pigmentation disorder characterized by depigmented macules or patches on the skin due to the loss of functional melanocytes. It affects around 0.5 percent of the global population.1 Vitiligo is classified as either focal, generalized, or segmental. While various treatments, such as topical steroids, topical calcineurin inhibitors, psoralen ultraviolet A, and narrowband ultraviolet B are effective in repigmenting focal and generalized vitiligo, their efficacy in segmental vitiligo (SV) is more limited.2 SV is usually refractory to treatment and surgical intervention is a preferred intervention modality.3 However, though surgery often results in satisfactory repigmentation in most cases, it is difficult to conduct in children and is often associated with complications, including color mismatch, cobblestoning, and donor site scarring.4

Topical calcineurin inhibitors, which act by immunomodulation, are useful in vitiligo and promote repigmentation without causing systemic immunosuppression.9

A 308-nm monochromatic excimer lamp (MEL) shares a similar mechanism of action as that of the 308-nm excimer laser.10 In this study, we examined the application of MEL in combination with topical tacrolimus 0.1% ointment for the treatment of SV.

This study was conducted in a dermatology clinic in central India. Ethical clearance
was obtained and informed consent and photoconsent was obtained from the participating patients. A total of 50 consecutive patients clinically diagnosed with SV were included in this study; however, five patients were lost to follow-up after one month and were excluded from the study. Patients excluded from this study were those with generalized vitiligo, those previously treated with any form of phototherapy in the previous three months, those with a history of using immunosuppressive or photosensitizing agents, and those who had undergone any surgery for vitiligo.

Treatment. After providing informed consent, all patients were treated with xenon chloride 308-nm MEL (Exci308; Aerolase). The spot size available with this system was 5×5cm. A suitable silicone stencil of the size of SV was used to protect the surrounding skin from burns and to avoid perilesional hyperpigmentation. Treatment was started with a fluence of 100MJ/cm2 and was increased by 50MJ/cm2 per session until slight erythema appeared after 24 hours. If intense erythema was present for more than 48 hours, the next session was skipped until the erythema resolved and the dose was reduced by 100MJ/ cm2. The reduced dose was continued for the following two sessions and then it was increased by 50MJ/cm2. Treatment was administered 2 to 3 times per week on nonconsecutive days. Additionally, patients were instructed to use tacrolimus 0.1% ointment twice a day on the affected areas. If the patient did not show any pigmentation after undergoing 15 to 20 sessions of MEL irradiation, the case was ruled as a treatment failure. In addition, treatment was discontinued if, after the initial response, there was no progress in repigmentation after 10 to 15 consecutive sessions.

Any side effects observed during the treatment period were also recorded.

Table 1. The demographic details of study participants with segmental vitiligo

Table 2. The efficacy of 308 monochromatic excimer light with topical tacrolimus in segmental vitiligo

Grade 3 response following application of topical 0.1% tacrolimus ointment twice daily and treatment with 308-nm monochromatic excimer lamp; A) at baseline; B) after 35 treatment sessions over 20 weeks

An excimer laser uses the combination of a noble gas (e.g., argon, krypton, or xenon) and a reactive gas (e.g., fluorine or chlorine). An excimer (i.e., excited dimer) is a short-lived molecule formed from two species, at least one of which is in an electronically excited state. Diatomic complexes involving a noble gas and a halide, such as xenon chloride, are common in the construction of excimer lasers.10 Under appropriate conditions of electrical stimulation and high pressure, a pseudo-molecule called an excimer is created, which can only exist in an energized state and which releases energy in the form of ultraviolet light upon returning to the ground state.11 By definition, the atoms of an excimer molecule are two or more atoms of the same chemical element. In the case of atoms of different elements (e.g., xenon chloride), the phenomenon is called an “Exci308.”12

Xenon chloride excimer laser or MEL emits monochromatic radiation with a wavelength of 308 nm. MEL differs from laser since the light emitted is noncoherent and noncollimated. However, it still has the medically relevant characteristic of monochromaticity required for treatment of vitiligo. MEL is found to be more erythemogenic than an excimer laser.10

Excimer laser and MEL have similar mechanisms of action. The 308-nm wavelength impacts nuclear DNA, which acts as a chromophore, facilitating DNA breakage and leading to a decrease in T-cell proliferation.13 Such also upregulates the tumor suppressor gene p53, thereby causing cell-cycle arrest and apoptosis.14 Apart from these immunological actions, it is also hypothesized to cause melanocyte migration and proliferation from an increase in peptide endothelin-1 in keratinocytes.15

MEL has certain advantages over excimer laser, such as cost. Excimer lasers have a recurring cost involving the change of potential toxic gases. In MEL, the active medium, xenon chloride, is hermetically sealed in a glass tube and does not need to be changed. The laser has a smaller spot size relative to light. It also raises a variety of safety issues due to high-voltage discharges and the disposal of potentially toxic gases. Further, MEL has several advantages over standard narrowband ultraviolet B therapy, which is slow-acting, requires significant office space, and is difficult to use in pediatric cases. Since exposure to normal skin is prevented with treatment by MEL, supraerythemogenic doses can be used. The modality occupies less space and the treatment is relatively faster.

Tacrolimus ointment, when used as a monotherapy, produces a variable but unsatisfactory response in patients with SV.20 However, various studies have demonstrated the effectiveness of combination treatment with tacrolimus and excimer laser or lamp in vitiligo.8,21

SV is a type of vitiligo characterized by depigmented macules or patches arranged in a patterned distribution. It constitutes 5 to 27.9 percent of studied cases of vitiligo.22,23 It accounts for 30 percent of cases of childhood vitiligo.24 An Indian study reported a prevalence of 6.7 percent among patients with vitiligo in India.25 It has an early onset in childhood. The lesions develop rapidly over a short period of time in a localized area, then remain stable. The pattern of distribution of lesions can be dermatomal, blaschkoid, phylloid, or checkerboard.26,27 Several hypotheses have been proposed for the etiopathogenesis of

SV, including neuronal mechanism, somatic mosaicism, microvascular skin-homing, and
a combination three-step theory.28 There is a lower incidence of autoimmunity and family history in SV.29,30 It responds poorly to medical treatment. However, when treated early after onset, the lesions seem to be more sensitive to the therapy.31 In one study, a potent topical corticosteroid was reported to provoke over 50-percent repigmentation in 34.2 percent of patients.32 Surgical therapy alone or in combination with adjuvant medical treatment often produces a satisfactory response in SV.33,34

The response to phototherapy, either with PUVA,35 311-nm narrow-band ultraviolet B,36 or excimer laser is poorer in patients with SV than in those with non-SV.5 However, a retrospective study by Bae Jung et al6 reported more than 75-percent repigmentation in 50 percent of their patients.6 They used a combination of treatment, including excimer laser, topical tacrolimus, and a short course of oral steroids. In the present study, 16 (35.6%) patients demonstrated complete repigmentation and 19 (42.2%) patients showed 75 to 99-percent repigmentation. The overall response to treatment was 77.8 percent, with only one patient not showing any repigmentation. The present study protocol did not use systemic steroids.

Disease duration was a statistically significant factor in the outcome of SV. Disease duration was negatively correlated with the success of treatment.28 Bae Jung et al6 reported that a disease duration of more than 12 months was an independent prognostic factor in the outcome of the disease. In our study, a disease duration of more than six months negatively affected the success rate. The site of involvement is also an important factor in the treatment outcome.37 Patients with facial lesions respond faster to treatment relative to those with acral lesions. The present study found that facial lesions and lesions on the waist responded significantly better to the treatment. The varying responsiveness seen in different lesion sites might be influenced by disease duration, as patients with facial lesions tended to present earlier for treatment than patients with lesions elsewhere. Children responded better to treatment than adults, but the difference was not statistically significant. The final dose of MEL and the number of treatment sessions were inversely related with the response rate in the present study. The procedure was well- tolerated without significant side effects. Mild side effects, such as erythema and perilesional hyperpigmentation were noted and resolved without any intervention. None of the patients dropped out from the study because of their side effects. The limitations of our study were its small sample size and lack of control group.

SV responds poorly to treatment, making surgical modalities the mainstay of treatment. Due to certain complications related to surgery and the difficulty in conducting procedures in children, 308-nm MEL was examined in this study. It is less expensive, faster, compact for use, and safer, targeting only the lesions of interest. As combination therapies work best for vitiligo, 308-nm excimer lamp and topical immunomodulator 0.1% tacrolimus were combined. This combination was found to be efficacious and safe if started early on in the course of the disease.