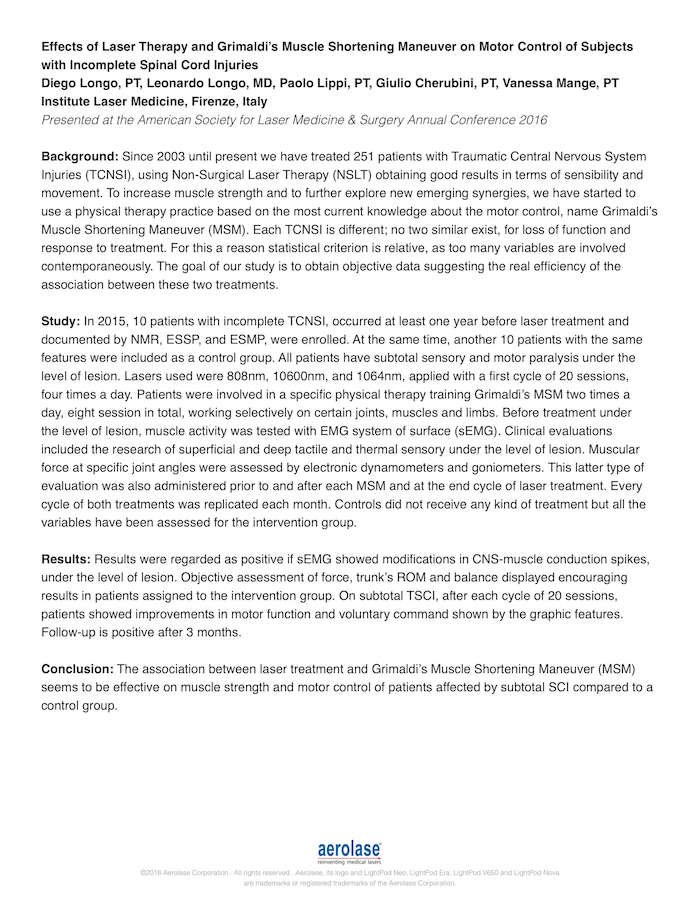 Background: Since 2003 until present we have treated 251 patients with Traumatic Central Nervous System Injuries (TCNSI), using Non-Surgical Laser Therapy (NSLT) obtaining good results in terms of sensibility and movement. To increase muscle strength and to further explore new emerging synergies, we have started to use a physical therapy practice based on the most current knowledge about the motor control, name Grimaldi’s Muscle Shortening Maneuver (MSM). Each TCNSI is different; no two similar exist, for loss of function and response to treatment. For this a reason statistical criterion is relative, as too many variables are involved contemporaneously. The goal of our study is to obtain objective data suggesting the real efficiency of the association between these two treatments.

Study: In 2015, 10 patients with incomplete TCNSI, occurred at least one year before laser treatment and documented by NMR, ESSP, and ESMP, were enrolled. At the same time, another 10 patients with the same features were included as a control group. All patients have subtotal sensory and motor paralysis under the level of lesion. Lasers used were 808nm, 10600nm, and 1064nm, applied with a first cycle of 20 sessions, four times a day. Patients were involved in a specific physical therapy training Grimaldi’s MSM two times a day, eight session in total, working selectively on certain joints, muscles and limbs. Before treatment under the level of lesion, muscle activity was tested with EMG system of surface (sEMG). Clinical evaluations included the research of superficial and deep tactile and thermal sensory under the level of lesion. Muscular force at specific joint angles were assessed by electronic dynamometers and goniometers. This latter type of evaluation was also administered prior to and after each MSM and at the end cycle of laser treatment. Every cycle of both treatments was replicated each month. Controls did not receive any kind of treatment but all the variables have been assessed for the intervention group.

Results: Results were regarded as positive if sEMG showed modifications in CNS-muscle conduction spikes, under the level of lesion. Objective assessment of force, trunk’s ROM and balance displayed encouraging results in patients assigned to the intervention group. On subtotal TSCI, after each cycle of 20 sessions, patients showed improvements in motor function and voluntary command shown by the graphic features. Follow-up is positive after 3 months.

Conclusion: The association between laser treatment and Grimaldi’s Muscle Shortening Maneuver (MSM) seems to be effective on muscle strength and motor control of patients affected by subtotal SCI compared to a control group.