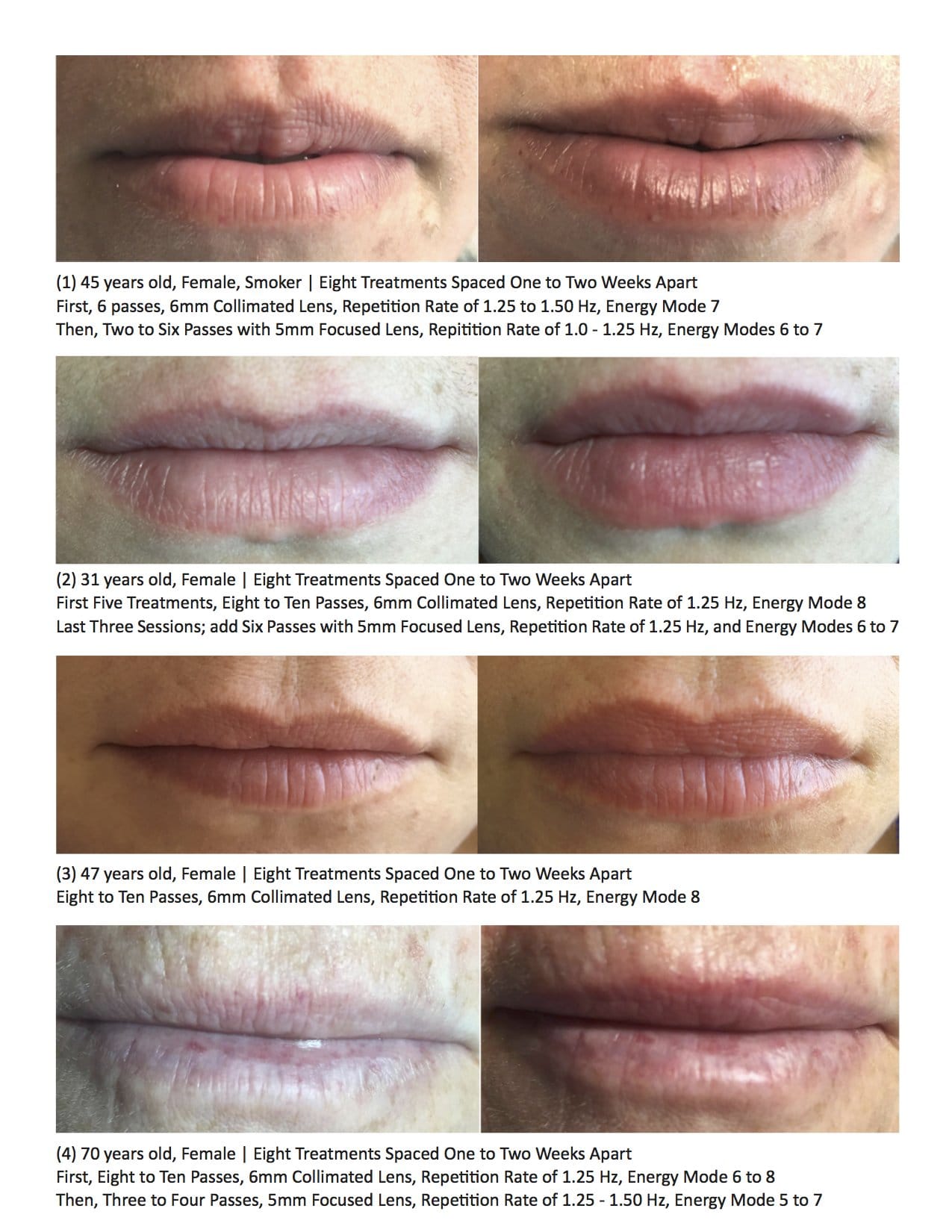 Background and Objective: Traditionally, augmenting lip size and shape has been performed with hyaluronic injections. A challenge for medical spas owned and operated by medical aestheticians is the inability to inject patients with fillers due to state regulations.

Light-based laser treatments of the lip can provide substantial plumping, color and texture improvement and significant reduction of fine lines and wrinkles surrounding the lip by heating the tissue of the lip and surrounding area to create collagen. Patients who have needle phobia, or who fear pain or bruising with needle procedures, can benefit from a needle-free lip treatment. But the laser needs to be able to deliver energy deep into the dermal tissue for collagenesis in a tolerable patient experience. The purpose of the study was to evaluate the efficacy of the treatment of lip rejuvenation and lip augmentation using a 650-microsecond Nd:YAG 1064nm laser.

Materials and Methods: 10 subjects aged from 18 to 65 years old with Fitzpatrick skin types I to IV, and with moderate to severe lip lines or wrinkles, were selected. Subjects were not interested in receiving hyaluronic fillers via injection and were seeking alternative treatment.

Subjects in this study were not injected with hyaluronic filler before or during the study. Prior to treatment, a facial cleanser was used to cleanse the skin. Before and after photographs were taken throughout the course of the study. An Nd:YAG laser with a wavelength of 1064nm and a 650-microsecond pulse duration (Neo laser, Aerolase Corporation, Tarrytown NY) was used for treatment.

Each subject underwent six to eight treatments, one to two weeks apart. The subjects were treated with fluences ranging from 25 to 41 J/cm2. No numbing agents were used before or during the course of the treatments. Laser pulses were applied to the lip area in a crosshatch pattern, covering the entire base of the lip as well as the surrounding lip areas where fine lines were present. Treatment included eight to ten passes across the entire treatment area, using a 6mm spot at 1.25 – 1.5 HZ repetition rate, with the rep rate dependant on the subject’s tolerance. Treatment continued in some cases using a 5mm lens and fluences ranging from 25 to 41 J/cm2, performing three passes over the treated area. Subjects were treated 6 to 8 times each with intervals of 1 to 2 weeks between treatments. Subjects were questioned about comfort level and pain tolerance both during the treatment and immediately after.

Results: Subjects experienced slight discomfort during passes seven and eight. This discomfort was not intolerable with older subjects (age ranges 25 to 70). The subjects reported no adverse effects after treatment and no signs of herpetic outbreaks were observed. Immediately after each treatment, the subjects experienced a rouging effect (brighter in various colors of red), noticeable augmentation of the lips and brief post-treatment erythema which resolved within a few hours. Results were achieved without adverse effects of lip injections such as lumpiness, bruising or asymmetrical results. All subjects reported high-levels of enhancement the day after treatment. By the third treatment session, subjects reported that fine lines and wrinkles surrounding the lip area were significantly reduced to a level of satisfaction as determined by each subject.

By the end of six to eight treatments, subjects reported significant enhancement in color, texture and youthfulness to their lips. Subjects also reported the enhancement lasted three to six months with younger subjects observing an effect of up to six months and subjects aged 60 and older reporting up to three months of improvement. The subjects reported that they would continue with treatment as needed in the future and recommend to peers.

Conclusion: Lip rejuvenation and plumping using an Nd:YAG 1064nm laser with a 650-microsecond pulse duration can provide significant improvement without the use of needles and with a high degree of patient satisfaction, minimal discomfort, no adverse effects and strong interest in ongoing treatments among those treated.