A New Device for Mild to Moderate Psoriasis 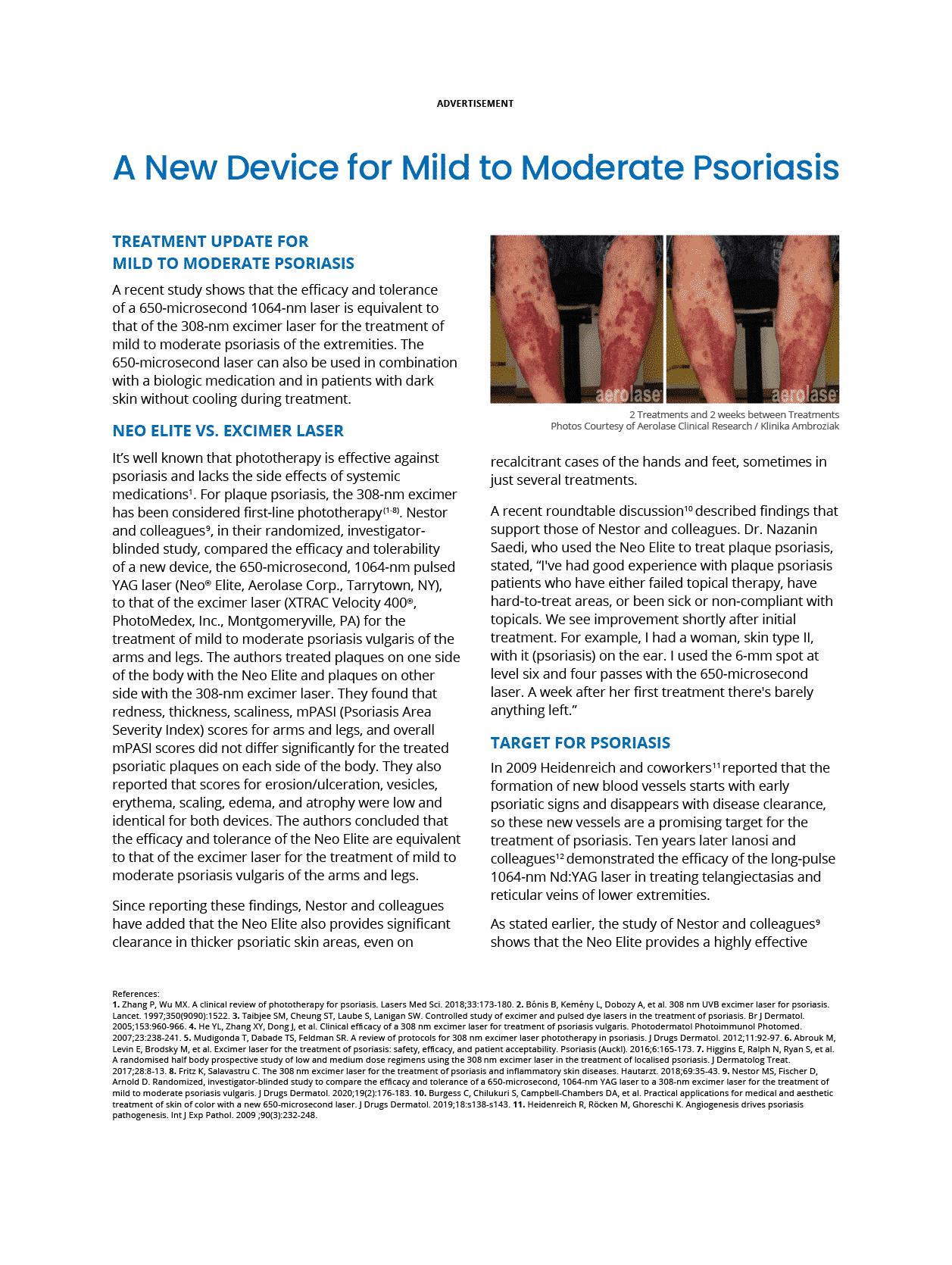 A recent study shows that the efficacy and tolerance of a 650-microsecond 1064-nm laser is equivalent to that of the 308-nm excimer laser for the treatment of mild to moderate psoriasis of the extremities. The 650-microsecond laser can also be used in combination with a biologic medication and in patients with dark skin without cooling during treatment.

Since reporting these findings, Nestor and colleagues have added that the Neo Elite also provides significant clearance in thicker psoriatic skin areas, even on recalcitrant cases of the hands and feet, sometimes in just several treatments.

A recent roundtable discussion10 described findings that support those of Nestor and colleagues. Dr. Nazanin Saedi, who used the Neo Elite to treat plaque psoriasis, stated, “I’ve had good experience with plaque psoriasis patients who have either failed topical therapy, have hard-to-treat areas, or been sick or non-compliant with topicals. We see improvement shortly after initial treatment. For example, I had a woman, skin type II, with it (psoriasis) on the ear. I used the 6-mm spot at level six and four passes with the 650-microsecond laser. A week after her first treatment there’s barely anything left.”

In 2009 Heidenreich and coworkers11 reported that the formation of new blood vessels starts with early psoriatic signs and disappears with disease clearance, so these new vessels are a promising target for the treatment of psoriasis. Ten years later lanosi and colleagues12 demonstrated the efficacy of the long-pulse 1064-nm Nd:YAG laser in treating telangiectasias and reticular veins of lower extremities.

As stated earlier, the study of Nestor and colleagues9 shows that the Neo Elite provides a highly effective treatment option for mild to moderate plaque psoriasis. Since the 1064-nm energy is selectively absorbed by hemoglobin in deep blood vessels13,14, the Neo Elite reaches the vasculature under the psoriatic plaque, making it possible to deliver energy to hard-to-treat areas without serious adverse effects. The result is that the Neo Elite affects both superficial and deep plaque blood vessels without the bruising associated with other lasers.

Treatments with the long pulse 1064-nm laser are painful and carry a risk of thermal damage and scarring15 because the pulse duration of 1064-nm lasers is 5 to 30 milliseconds, which is higher than the 700-microsecond thermal relaxation time of skin tissue16,17. Pulse durations of this magnitude require continuous cooling of the target skin tissue to minimize damage to surrounding tissue and discomfort during treatment18.

Unlike its long pulse 1064-nm counterpart, Neo Elite does not require cooling during treatment. The pulse duration is shorter than the thermal relaxation time of both skin and blood vessels, so the therapeutic target is heated more rapidly than the rate that heat moves to the surrounding skin, thus lowering the risk of damage and pigmentary changes19.

The Neo Elite also delivers energy in a collimated beam, so the operator may vary handpiece-to-skin distance without changing the fluence. This enhances both efficacy and safety during treatment and renders treatment less dependent on operator technique19.

The Neo Elite has also been used in combination with biologic therapies for psoriasis. In a recent study 20, 34 patients with severe plaque psoriasis were treated at weeks 0, 4, 16, and 28 with ustekinumab (Stelara®, Jansen Biotech, Inc., Horsham, PA) followed by eight Neo Elite treatments, 3 to 4 passes at 25–28 J/cm2, at 1-week intervals. PASI and BSA (Body Surface Area) scores were evaluated after completion of biologic therapy and after the final Neo Elite session.

The Neo Elite can also be used to treat patients with dark skin. The pulse duration is shorter than the thermal relaxation time of both the blood vessels and the skin, so the target is heated more rapidly than the rate that heat is conducted to the surrounding skin. This reduces damage and lowers the risk of pigmentary changes18–21. With its 650-microsecond pulse duration, the Neo Elite’s infrared 1064-nm energy also lacks the increased risks of skin cancer and skin aging linked to UV lasers.

These studies and others have resulted in FDA clearance of the Neo Elite for the treatment of psoriasis.

Photos Courtesy of Yelena Kipervas, DO.

Aerolase Corporation, a leading aesthetic laser innovator, seeks a Staff Accountant / Junior Accountant. Having made the Inc. 5000 list as one of the world’s fastest growing private companies as well as annual best-in-class product awards, Aerolase has transformed the market with products that provide uniquely tolerable treatments to the patients and exceptionally high ROI for the practitioners. The company offers competitive and an exciting high-growth company culture.

• Bachelor’s or master’s degree in Accounting a MUST, good understanding of GAAP
• 1-3 years’ experience in an accounting function (including internship)
• General Ledger/Operational Accounting experience
• Knowledge of Quickbooks or other reporting software a plus (more the better)
• Industry experience a plus

Aerolase Corporation, a leading aesthetic laser innovator, seeks a Senior Accountant. Having made the Inc. 5000 list as one of the world’s fastest growing private companies as well as annual best-in-class product awards, Aerolase has transformed the market with products that provide uniquely tolerable treatments to the patients and exceptionally high ROI for the practitioners. The company offers competitive and an exciting high-growth company culture.

• Strong knowledge of the monthly close process and technical accounting

• Detailed oriented, with ability to see the big picture

• Self-starter who can work independently and employ time management skills to meet deadlines.

• Global consolidations experience a plus

• Bachelor’s or master’s degree in Accounting a MUST, good understanding of GAAP

• General Ledger/Operational Accounting experience a must

• Extensive knowledge of Quickbooks and other reporting software

• Prior involvement with system implementation

• Prior public accounting experience (any size firm) a plus

• Industry experience a plus