From Doubter to Believer

Traditional therapies, such as biologics, was at the top of the mind for Lisa Ledden when it came to treating her psoriatic patients. That is until she started to combine biologics with the Aerolase Neo Elite charging approximately $180 per treatment.

According to Ledden, “if I’m putting someone on a biologic therapy, I’ll incorporate the laser just as a jumpstart.” Lisa had found this to be extremely beneficial since “most insurances reimburse. Certain insurances don’t even require pre-authorizations, such as Medicare or Blue Cross patients. I don’t think I have had any denials.”

The benefits didn’t just stop at easy reimbursements and pre-authorizations. Lisa Ledden also saw that the laser by itself had proven to provide substantial results. This came to a shock to Lisa as she reflected, “When Christine [Aerolase Sales Representative] and I first spoke, I was not enthusiastic about treating psoriasis with the laser and now I really love it.” Her patients are loving the results too, so much that they became almost addicted to them.

For psoriasis patients, results are more than just a happy moment. To them, it’s life-changing and that’s exactly what Lisa Ledden saw when she started incorporating the Neo Elite into her protocols.

A memorable moment for Lisa is when a 75-year-old woman who had about 15% body surface area covered came in and was treated with the Neo Elite. Lisa stated: “This patient did not respond well to topicals and was not a candidate for systemic therapy. She said she didn’t wear short sleeve shirts, she wouldn’t ever wear shorts, intimacy was an issue. She literally had me in tears one day because she said if this laser was around when she was in her teens and 20s, it would have literally changed her life, which is crazy. It just was really, ‘Wow’.”

Becoming a bigger believer in the Neo’s results, Lisa continued to treat more patients. Shortly thereafter, Lisa Ledden changed the life of yet another patient; “I have a gentleman that I’ve been seeing now for probably two months who has hands and feet psoriasis. Professionally, he was embarrassed and he’d get cracks and fissures. Now, his hands just look a little erythemic. He’s completely thrilled. He books five appointments at a time. It’s crazy. He doesn’t want to stop. He’s like, ‘I’ll see you next week.’”

Talk of the Century

As the word spread around about Lisa Ledden’s psoriatic results using the Neo Elite, multiple patients started coming in.

From easy reimbursements to patient obsession, Lisa Ledden was shocked to see a treatment she originally doubted change the life of her psoriatic patients. For Lisa, the Neo Elite changed more than her patient’s life, it had forever changed the way she treated psoriasis.

Aerolase Success Story Becoming Your Own Aesthetic Business Owner Inset Data Points (Practice at a Glance) Business: AAC by René opened May 2020 with one

Introduction: Blair Wegner has been working at Aspire Plastic Surgery & Med Spa as an Aesthetician for over 3 years. She is joined by 3

Introduction Dr. Nabil Fakih has spent many years studying Facial Plastic Surgery as a surgeon. In his studies, he became more aware of advanced therapeutic 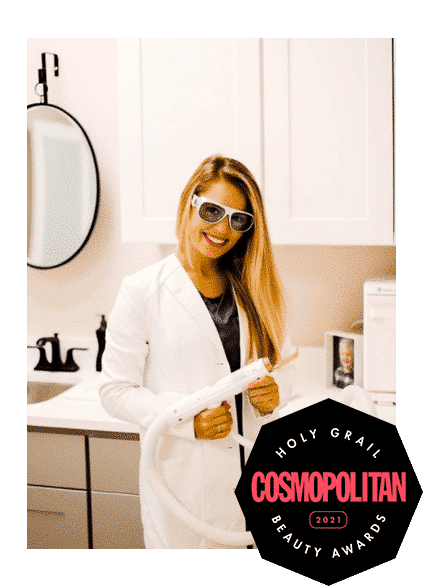 Ready to Improve Skin Concerns
in a Whole New Way?

Not Ready? Stay updated with our Newsletter

Find out how Aerolase Can Grow Your Business